“European values for the future of South-eastern European countries” – 2013 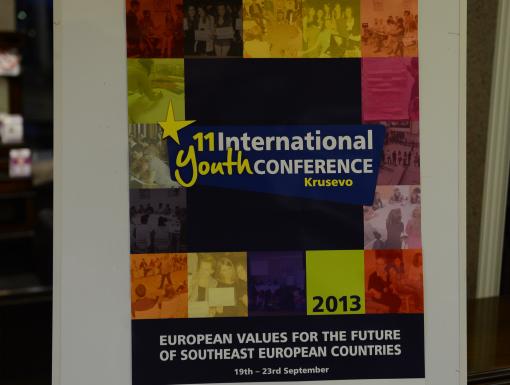 When Youth Alliance from Krusevo proposed the International Youth Conference “European values for the future of SEE countries” in 2003, our vision was this event to be the voice of young people in Southeast Europe, where young people will be encouraged and supported to be promoters of the European values in their countries. Since then, Youth Alliance with support of the Stability Pact for Southeast Europe sponsored by Germany and in partnership with Friedrich Ebert Foundation, office Skopje is organizing the IYC “European values for the future of SEE countries”. In other words, we strongly believe that this conference is empowering, encouraging, involving, representing, reaching out and supporting the young people to be leaders and creators of the European future of SEE region. The 11th International Youth Conference brought together 60 youth leaders from South East Europe and Europe in Krusevo to discuss current issues and explore new approaches in youth policy and youth work across South East Europe and Europe in general. Organized in order to represent our common interests, we all together concluded that the young people in South-eastern Europe need European solutions to their needs and challenges and in the current uncertain political and social context that affects young people, we can be powerful catalysts for positive change and contributors of innovative solutions to today’s problems.

The 11th International Youth Conference took place traditionally in Krusevo, Republic of North Macedonia from 19th to 23rd of September 2013. The main issues brought up and discussed by experts and participants during the conference focused on three main areas: Challenges of young people from Southeast Europe today; Young people’s participation in politics and society and European integration of Western Balkans. Program with details about the structure and topics of 11th International Youth Conference you can find on the following link.

As we have stated during the preparation of this year conference, today, mobility, living and learning in a united Europe have become a given for many young people. Nevertheless, we have concluded that the younger generation particularly from countries engaged in the accession process to the European Union are feeling that Europe is a long way away or Europe is somewhere else, and this applies especially to the European Union. The topic of the International Youth Conference on “European Values for the future of SEE countries”, therefore is answering to the questions and doubts of young people on one hand, and on the other hand is bringing back their confidence in the European project. Moreover, this youth project is striving towards bringing the European Values closer to the young people for more than a decade. Finally, we have no reservations to state that this opportunity for policymaking with young people, engaging with their realities and developing structured approaches to their main issues, created a laboratory where each aspect of one’s identity as a citizen, of a region, a country or the European Union fully was analysed and explored. All involved stakeholders in the conference brought a general conclusion: Europe- that is us. The overall results and conclusions from the conference you can find on the conference brochure.